Get outta Paris, but just a bit

Oh the plans I’ve made to explore France outside of Paris. Cycle the Loire, visit Normandy, finally go to Giverny. But once I’m in the city, I never leave.

Parents of a friend, who live in Provence and travel all over France on a huge motorcycle, scoff at my staying in Paris “C’est pas la France!”

But a friend’s birthday celebration got me out of the city limits, even just a bit, while still allowing me to return in time for an evening apèro. Out near the expansive park and museum complex, of La Villette, you can now rent little red and white electric boats and float up the canal for hours.

We took two boats and lots of wine. The captain’s seat beckoned and I commandeered one of our fleet, with just a near miss of a huge boat, and a momentary crisis when I neglected to put our anchoring rope in the boat and got it wrapped in the engine, which ground to a halt.

We got as far as Pantin, a town right past Paris which is also reachable by metro. Two years ago The New York Times interviewed someone from Vogue who called Pantin the next Brooklyn, but that’s a grandiose pronouncement that the locals I spoke to said might become true, but not for another few years.

Around Pantin the canal begins to widen and there’s more greenery as well as hulking old warehouses. And loads of street art: jumbled tagging, panels dedicated to one theme, and a huge wall featuring a gorilla, bear, elephant, and several other animals.

Thanks to the ever adventurous Carolyn G for planning this 3 hour tour. She dressed for the occasion in sailing-themed clothes. As one does. 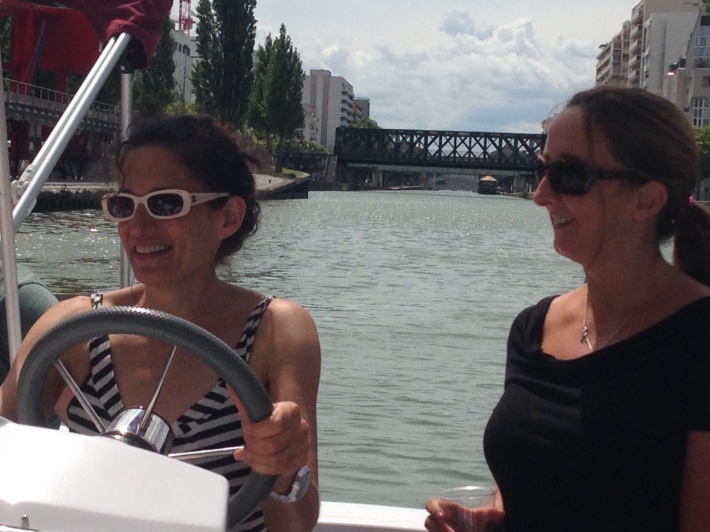 At the helm, with surprisingly patient real sailor Sally